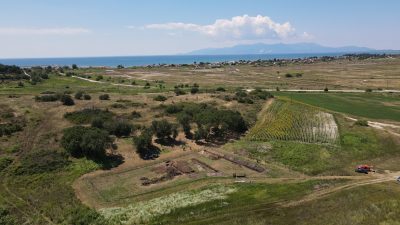 TranScapes aims to investigate the origin and early development of ancient Mediterranean landscapes through the study of their trans-Mediterranean roots and the impact of colonization, conquest and other processes of cultural influence modulating socio-environmental interactions. It is the logical evolution of GIAPs previous projects and research interests, and it constitutes a significant broadening and deepening of their objectives and methodological approaches. TranScapes will further the analysis of transported cultural landscapes as means for the understanding of trans-Mediterranean cultural and economic links and landscape historical evolution. The study of the territories of two originally Greek cities from the Ionian tribe (Emporion/Emporiae in Catalonia and Abdera in Thrace) and their hinterlands, initiated in previous projects, will be furthered, enlarged and deepened in TranScapes. To do so the project will employ a combination of innovative multi-disciplinary approaches, including archaeomorphology using historical aerial photographs and ancient maps, multitemporal satellite remote sensing, multi-scale and multi-methods survey, bioarchaeological studies (archaeozoology, anthracology, malacology), geoarchaeological investigations, sediment cores drilling in lakes and wetlands, test pits excavation in soils, sites and structures, and multi-proxy palaeoenvironmental analysis of the retrieved sedimentary samples. The latter will include sedimentology, geochemistry, micromorphology, charcoal analysis, palynology, isotopes, lipids and sedimentary DNA analysis, and radiocarbon dating.

Besides the colonial centres, both study areas will include sites from the hinterland with prehistoric to medieval chronologies, to increase temporal and spatial coverage. All the study cases attest to a remarkable mixture of historical cultural exchanges between native and colonial settlements. In the Empordà, the research will move further south to carry out a territorial and landscape study in the surroundings of the oppidum of Ullastret, one of the most important Iberian cities in the north-east of the Iberian Peninsula which evolution was directly connected with the Greek colony of Emporion. Research works will be pursued and widened in high mountain areas surrounding Iulia Libica, located in the distal hinterland (Cerdanya), where previous surveys show the impact of the Roman conquest in mountain environments deeply anthropized since the Neolithic. In coastal Thrace, investigations will be furthered and deepened around Abdera (especially in the harbour of the colony), but will also be extended to explore Thracian sites in the foothills at the edge of the coastal plain corresponding to the chora of the colony (Kimmeria), and in more inland mountain areas of the Rhodope range (Komnina). All these sites will provide an ideal ground to test these new multidisciplinary approaches and extract general insights on cultural modifications of landscapes.

The project aims at assessing landscape changes related to indigenous and colonial settlements in these unique scenarios where the shaping of cultural landscapes occurred within dynamic ecosystems. The development of cultural landscapes models based on the connectivity and interaction of socio-environmental systems in the Mediterranean basin will provide important data for the understanding and protection of Mediterranean productive landscapes as valuable heritage and cultural resources.