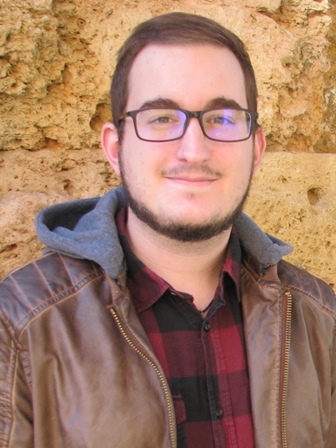 (Barcelona, 1992) Graduated in archaeology by the Universitat Autònoma de Barcelona in 2015. Previously, in 2013, he received a scholarship for a course in the University of California, Riverside (United States). He studied the interuniversitarian master’s degree in Classical archaeology by the Institut Català d’Arqueologia Clàssica, the Universitat Rovira i Virgili de Tarragona, and the Universitat Autònoma de Barcelona between 2015 and 2017. Meanwhile, he received the BIR (Beca d’Iniciació a la Recerca) scholarhip from the ICAC to work on his master’s thesis in collaboration with the Arqueometria i Produccions Artístiques research group (ArPA). His master’s thesis, directed by dr. Diana Gorostidi (URV-ICAC), was titled “Corpus Prosopographicum Tarraconense: a methological approach”, and consisted in the elaboration of a prosopographical catalogue of individuals registered in Late Republican and Julio-Claudian epigraphy from Tarraco, from which various conferences and publications have originated.

At the end of 2017 he was accepted in the ICAC as visiting predoctoral researcher, focusing on Latin epigraphy and gender history with the Archaeometrics and Artistic Productions research group (ArPA). After finishing a master’s degree in secondary education at the Universitat de València, in 2019 he received a PhD scholarship from the Università degli Studi di Perugia (Italy) to conduct a doctoral thesis about women’s social roles in the Roman cities of the Valle Umbra (prov. of Perugia), directed by professor Gian Luca Grassigli.