Open enrollment for the 5th Training Workshop on Christian and Visigoth Archaeology, run by the ICAC and the Riba-roja de Turia City Council! It will take place from 25 July to 12 August 2022 at the Valencia “la Vella” archaeological site (next to Valencia).

The 5th Training Workshop on Christian and Visigoth Archaeology is a unique opportunity to learn about the basic methodology of archaeological excavation and analysis, but also to work on a very special site, such as that of Valencia “la Vella”.

The workshop program combines daily fieldwork at the site with tasks of analysis of the results, as well as various parallel activities (theoretical sessions and visits to sites in the surrounding area). The course offers training content specifically oriented towards Late Antique archaeology, its material culture, and its historical problems.

From July 25 to August 12, the training workshop will alternate the excavation of the archaeological site of Valencia “la Vella” with hands-on tasks of washing and cataloging archaeological remains found, visits to other Late Ancient sites in the surrounding area, and some scientific talks on topics related to the Visigothic and Christian world. 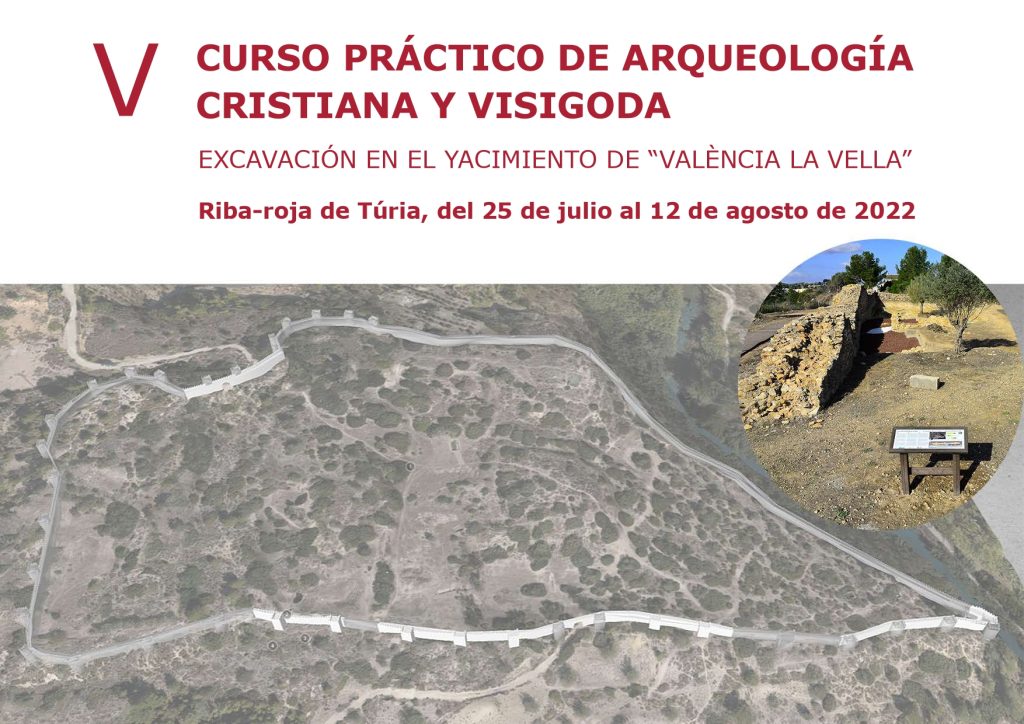 Informational brochure, with all the practical and registration information (in Spanish).

Regitration form (in Spanish) (send by email to activitats@icac.cat) 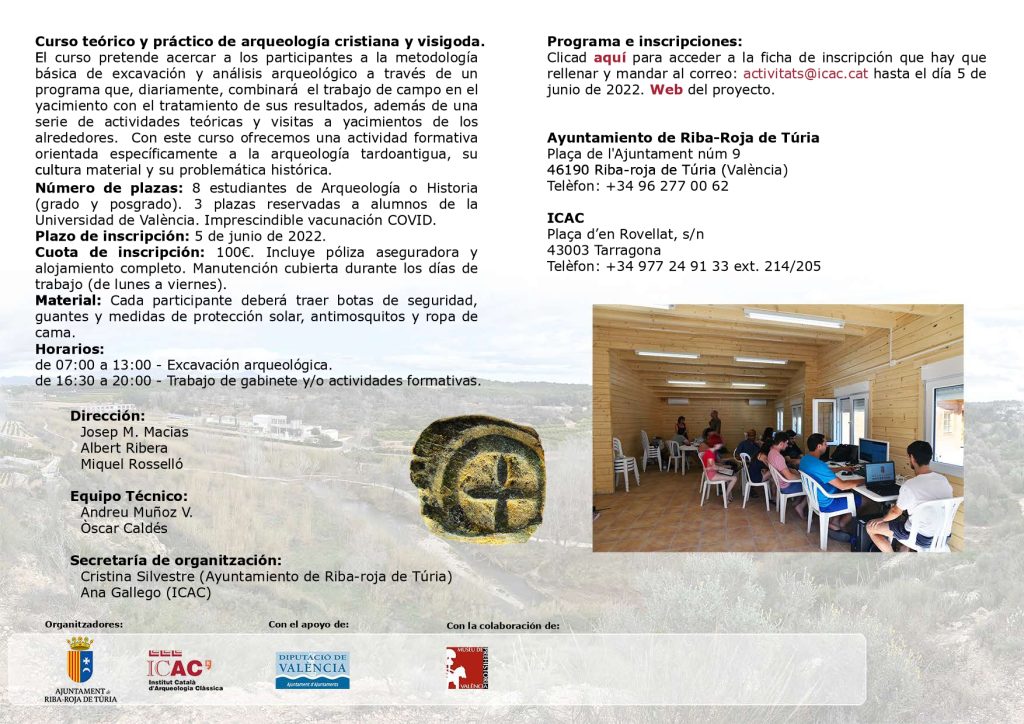 Valencia “la Vella” is an archaeological site from the Visigothic period in the municipality of Riba-roja de Turia, located about 16 km from the city of Valencia. It is a walled enclave located on top of a hill in a spectacular location overlooking the River Turia, about 2 km from the Pla de Nadal palace and within the Turia River Natural Park.

Since 2016, the City Council of Riba-roja de Turia (Valencia) promotes an archaeological research and heritage conservation and dissemination project developed by the Catalan Institute of Classical Archaeology (under the direction of ICAC researcher Josep Maria Macias), with the support of the Valencia Provincial Council and the Generalitat Valenciana.

Valencia «la Vella» is an ex novo foundation that stands out for its walls that surround a river hill 20/40 m high and that are reinforced by numerous towers.

The settlement has been known since the 14th century and, partly due to its name, had been associated with the pre-Roman and Roman settlement Pallantia. Archaeological excavations in the seventies of the last century, motivated by partial destruction of the site, showed a Late Antiquity chronology.

Valencia “la Vella” was once again removed from all scientific interest for decades. Currently, it is still an unknown and nameless city. It is an archaeological site yet to be discovered, although archaeological excavations firmly confirm its value and cultural potential, and historical relevance. It is a Visigothic city built “suddenly” 16 km from Valentia, during the second half of the 6th century and dominating the Turia river waterway.

In 2016 the ICAC posted online in open access a collection of eleven 3D models of the Valencia “la Vella” site on the Sketchfab platform:

Within the framework of the research project coordinated by the ICAC, six archaeological campaigns have been carried out at the site. The first four were integrated into the Christian and Visigothic Archeology courses, where over twenty students and graduates from around the world participated. The last two campaigns (2020 and 2021) followed a different dynamic due to the pandemic situation.

Valencia «la Vella»: an unknown Visigoth city next to the metro line of Valencia, ICAC, February 28, 2022.