Since 2016, the City Council of Riba-roja de Turia (Valencia) promotes an archaeological research and heritage conservation and dissemination project developed by the Catalan Institute of Classical Archaeology (ICAC), with the support of the Valencia Provincial Council and the Generalitat Valenciana.

ICAC project also foresees the opening to the public of a part of the archaeological site for guided visits. With this, Riba-roja de Túria will be a benchmark of the Hispanic Visigothic past, taking into account that, in addition, it has been managing the well-known Pla de Nadal Palace for many years, with its museum in the town’s medieval castle and, now, a Visigothic city of about 5 hectares in size and located 10 minutes’ walk from a metro stop, in the third-largest metropolitan area in Spain.

Riba-roja de Túria, a reference to the Hispanic Visigotic past

On February 28, an institutional visit was made to the site of Valencia «la Vella», to see how the conditioning works for guided visits are progressing. ICAC director, Josep Maria Palet, together with ICAC researchers Josep Maria Macias and Albert Ribera, have accompanied a delegation made up of the Autonomous Secretary of Tourism of the Generalitat Valenciana, Francesc Colomer; the mayor of Riba-roja de Túria, Robert Raga; Tourism councilor of the City Council of Riba-roja de Túria, Esther Gómez; and the municipal architect, Tirso Ávila.

Here you can see perfectly a resource and its evolution to transform it into a tourist product and connecting it with people”, Francesc Colomer.

Colomer highlighted the relevance of the site and that “the Visigothic culture can allow us to differentiate ourselves and specialize in a very interesting field of history”. He has also highlighted the important support of Tourism Comunitat Valenciana to the project.

The responsible for Tourism explained that the archaeological site “is very close to Valencia, a key point of great reception for international tourists that should be taken advantage of” and that, as it is close to the metro station, “this adaptation to receive visitors places Riba-roja de Túria as a landmark”.

The mayor of Riba-roja de Túria, Robert Raga, highlighted that “in Riba-roja de Túria we have large archaeological sites from the Visigothic era” and has pointed out that “this site is very emblematic and, thanks to the grant of more than 100,000 euros from Tourism Comunitat Valenciana to value it, now it will be more popular so that people can come to visit it”. 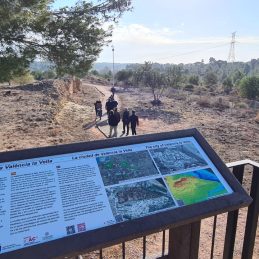 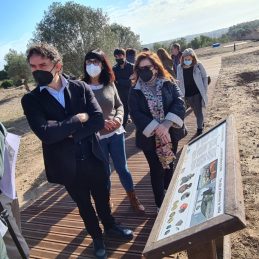 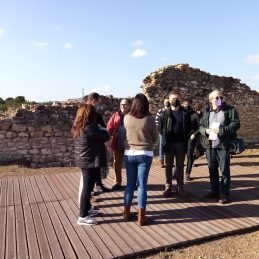 The Visigothic site of Valencia “la Vella” has been known since the 14th century and, partly due to its name, had been associated with the pre-Roman and Roman settlement Pallantia. Archaeological excavations in the seventies of the last century, motivated by partial destruction of the site, showed a Late Antiquity chronology.

From then on, Valencia “la Vella” was once again removed from all scientific interest for decades. Currently, it is still an unknown and nameless city. It is an archaeological site yet to be discovered, although archaeological excavations firmly confirm its value and cultural potential, and historical relevance. It is a Visigothic city built “suddenly” 16 km from Valentia, during the second half of the 6th century and dominating the Turia river waterway.

Valencia «la Vella» is an ex novo foundation that stands out for its walls that surround a river hill 20/40 m high and that are reinforced by numerous towers.

The ICAC posted online in open access a collection of eleven 3D models of the Valencia “la Vella” site on the Sketchfab platform:

Precisely, the proximity to the ancient Roman city and the important episcopal seat that guarded the relics of the martyr Saint Vincent is what raises more doubts in relation to the geopolitics of the time.

The entire construction shows a unitary work, which housed a well-planned intramural enclosure and which, due to the time in which it was carried out, represented a great effort that, according to the researchers responsible for the project, Josep Maria Macias and Albert Ribera, link to the Visigoth kingdom.

The interior of the city was divided into three large topographical areas with their internal enclosures: an upper area with noble constructions; an intermediate area, where a cereal storage sector and an oven have been identified; and the lower area, with public buildings and a large entrance plaza.

The crockery and the numerous coins show a hinterland city perfectly connected with the commercial circuits of the Mediterranean basin. At the same time, it is worth noting the abundant spolio stone material that possibly comes from the nearby and abandoned Roman city of Edeta (Llíria).

For the moment, the construction of the city is part of the confrontation between the emerging regnum gothorum with capital in Toledo and the Byzantine expansion in the Hispanic southeast. In this context, ICAC researchers place the construction of Valencia “la Vella”, all interpreting it as a royal initiative, probably by Leovigildo.

If so, numerous details of the history of this period will be reconsidered, as well as a new definition of the spaces of influence between the two political powers. Finally, no clear evidence of occupation in the 8th century has been found, a fact that could indicate its abandonment and, perhaps, the transfer of the population to Pla de Nadal site, just 2 km away.

Within the framework of the research project coordinated by the ICAC, six archaeological campaigns have been carried out at the site. The first four were integrated into the Christian and Visigothic Archeology courses, where over twenty students and graduates from around the world participated. The last two campaigns (2020 and 2021) have followed a different dynamic due to the pandemic situation.